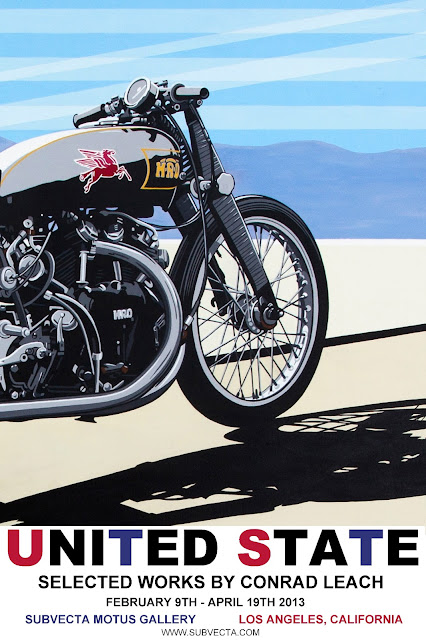 (Glendale, CA) – “United State, Selected works by Conrad Leach” expands
upon Leach’s dialogue of the body’s relationship with the machine and the
visceral experience of speed. The physicality of Leach’s painting style and
his use of high pigmented colors depict charged moments saturated with
erotic tension and re-examine the familiar narrative of freedom and the open
road. The meticulous precision of his strokes and use of bright and punchy
colors make it easy to be swept into the canvas. It is clear that Leach comes
to art making via the fashion industry through his culturally driven and energetic
approach. He has shown extensively in London with Gauntett Gallery, where
he resides, and in Tokyo with cafegroove. “United State” is Leach’s first solo
exhibition in the United States, his first in a series at Subvecta Motus Gallery,
and is curated by Stacie B. London.
Subvecta Motus Gallery is an art gallery dedicated to work made by rigorous
process in the 21st century, and focuses on art which questions the relationship
of humans and machines; analogue versus digital. These works make a practice
of finding commonalities between seemingly disparate elements, thereby revealing
delicate narratives. Subtly stirring, the fragile balance between opposites and the
relationships that exist between them, us, and each other is questioned and revealed.
Newer Post Older Post Home