Lloyd's gaff inspired and guided us all ...
At last a retrospective of the great man and his works. 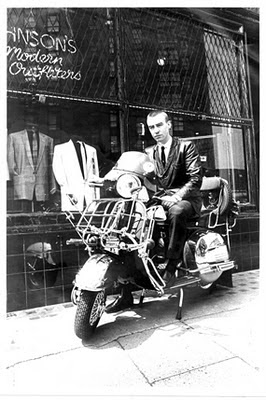 Lloyd Johnson: The Modern Outfitter.
Curated by Paul Gorman.
CHELSEA Space
Chelsea College of Art and Design
16 John Islip Street
London Sw1P 4JU
24.01.12 – 03.03.12
CHELSEA Space is delighted to present Lloyd Johnson: The Modern Outfitter, an exhibition celebrating the work of one of the central figures operating at the cross-hatches of popular music and British fashion design. Centred on his core archive of garments, textiles, artwork, personal effects and ephemera, this visual feast also presents key clothing from customers and collectors from around the world.
THE MODERN OUTFITTER also opens the door on a pre-digital world of shopping, retailing, production and design, one where Johnson’s boutiques became total environments which also told his own story, from Modernist beginnings in the seaside town of Hastings through hippy splendour in London and Paris in the 60s to new wave, post-punk and New Romanticism in the 70s and 80s to LA’s Tiki/lounge scene and Tokyo’s leather-clad rockers of the 90s and 00s.
Bob Dylan, Tom Waits, Rod Stewart, Sex Pistols, The Clash, Keith Richards, Chrissie Hynde, The Specials, George Michael, Jack Nicholson, Kid Creole, Fred Astaire...the list of Johnson’s fans and customers is as breathtaking as the career of this much-treasured design exemplar.
For more information please contact us on info@chelseaspace.org.